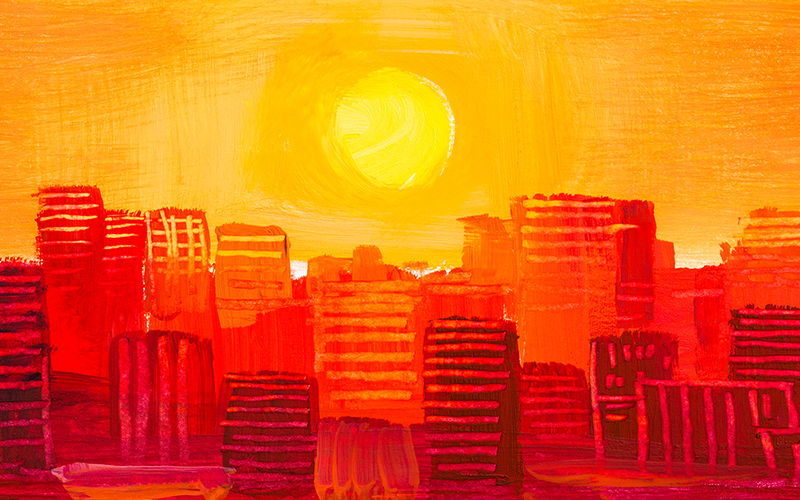 The maps, of course, show the geographic distribution of race, tree canopy, and health indicators across US cities. Much research in the past four decades has revealed that environmental hazards and lack of access to green space affect low-income communities of color in particular. As climate change makes cities warmer, low-income neighborhoods of color can be up to 13°F hotter than their wealthier, whiter counterparts, with deadly consequences, according to a recent study in the journal Climate.

The paper is the first to explicitly link a racist government policy to unequal exposure to extreme heat. Ninety-four percent of the cities included in the study exhibited higher land-surface temperatures in formerly “redlined” areas compared with non-redlined areas and with the city average.

Redlining was a federal housing policy in the 1930s that diverted funds from low-income neighborhoods of color while drawing large infrastructure projects like highways and landfills to these same areas. The Home Owners’ Loan Corporation (HOLC) refinanced mortgages and doled out loans according to color-coded maps of 239 cities that graded neighborhoods between A and D. Neighborhoods scoring A were “best,” B were “still desirable,” C were “definitely declining,” and D were “hazardous.” The policy induced systemic disinvestment from areas deemed “declining” and “hazardous.”

Redlining was banned in the Fair Housing Act of 1968, but its legacy remains written on the landscape. “Its tentacles are everywhere,” says Cate Mingoya, director of capacity building at Groundwork USA, which educates and mobilizes communities on climate resilience.

Heat waves exacerbated by climate change smother these urban heat islands, killing more people every year than any other natural disaster. Many fatalities occur at night, since the body can’t thermoregulate during REM sleep. People simply don’t wake up.

The investigation reveals macro-scale trends. Vivek Shandas, a professor of urban studies and planning at Portland State University and one of the study coauthors, is spearheading a citizen science effort in more than a dozen cities to account for more specific, block-to-block land use and temperature differences. Jeremy Hoffman, chief scientist at the Science Museum of Virginia and another coauthor, says he’s looking forward to the results of this more granular approach as it could point to community-specific solutions. “If we want to get at things related to the health impacts of heat waves, [like] potentially the air quality in these areas, we need . . . higher detailed descriptions of the land use in these areas,” he says.

Cooling down urban heat islands can be challenging. For immediate relief, some cities open cooling centers in churches or municipal buildings. But Shandas says cooling centers collect a lot of personal information from visitors, which deters some people who are fearful of immigration repercussions. Plus, throwing more air conditioning at the heat only uses more energy, which exacerbates the climate problem that made it so hot in the first place.

In the medium term, there are many ways to make neighborhoods more heat resilient. Experts say the solutions should be customized by city. Tree planting, green roofs, and reducing the abundance of impervious surfaces like roads are some of the most well-known strategies. In addition, skyscrapers can create “urban canyons” that provide shade, and varying the heights of buildings can allow air to move through the city. But Shandas gets frustrated when people say, “Oh, just go plant a tree.” He’s looking for more robust strategies that reflect citizens’ long-term visions for their communities.

So is Mingoya, from Groundwork USA, whose Climate Safe Neighborhoods partnership engages communities in five cities in a roughly three-step process. First is education, to help residents understand that their neighborhoods don’t look this way by accident. Local youth in Richmond, Virginia, go door-to-door with city maps printed on transparent paper: a redlining map, a heat map, a tree canopy map, and an impervious pavement map. They invite residents to overlay the transparencies.

Mingoya says the exercise has been extremely effective. “It’s brought together folks that have been really skeptical of elements of the environmental justice movement . . . with people who have been fighting for this their entire lives,” she says.

The next step is working with residents to identify which heat-mitigation strategies are most important to them. Both Shandas and Climate Safe Neighborhoods host workshops that engage a diverse variety of stakeholders including students, community groups, municipal officials, and land trusts. Mingoya says that some residents are skeptical of heat-mitigation measures because they’re accustomed to being let down by local and federal policies. But the organization works to identify opportunities for intervention in policy and budget processes so that historically redlined neighborhoods have the opportunity to benefit from mitigation measures.

Making urban heat islands more liveable could have an insidious side effect that many cities are already familiar with: gentrification. Hoffman and Mingoya say keeping local voices, power, and resources at the center of mitigation projects will help ensure that they are the ones who benefit.

As heat-mitigation projects unfold in cities across the country, Bullard is heartened by all the young people working to create a livable future. It might have taken decades for his ideas about race and the environment to become mainstream, but he doesn’t mind. Environmental justice is a “marathon relay,” he says.