It’s my fourth night camping in Utah, and I’m wearing all my layers, huddled inside my zipped-tight sleeping bag, blocking out the cold and the freezing desert air. I am one of nine participants on the National Outdoor Leadership School’s first all-LGBTQ backpacking expedition, and tonight I am reading an essay our instructor has copied from The New Yorker to read on the trail, Cyrus Grace Dunham’s “A Year Without a Name.” With my headlamp illuminating the loose pages, I read Dunham describe the compromises they made to come out to their family as transgender:

“My confession implied that my identity was simple and fixed. The truth was something harder to explain. I wished I could have let them into my confusion without making them doubt my conviction. I had made the choice to sacrifice nuance for legibility.”

Just two months earlier, I had come out as bisexual and queer to my own family in a letter. With that experience so raw, I didn’t know how I would show up on this all-LGBTQ+ trip. I felt excited to be a part of something so historic and unprecedented. I also felt relieved and privileged to spend nine days in community with other queer people during a moment when I needed that sense of community more than ever. 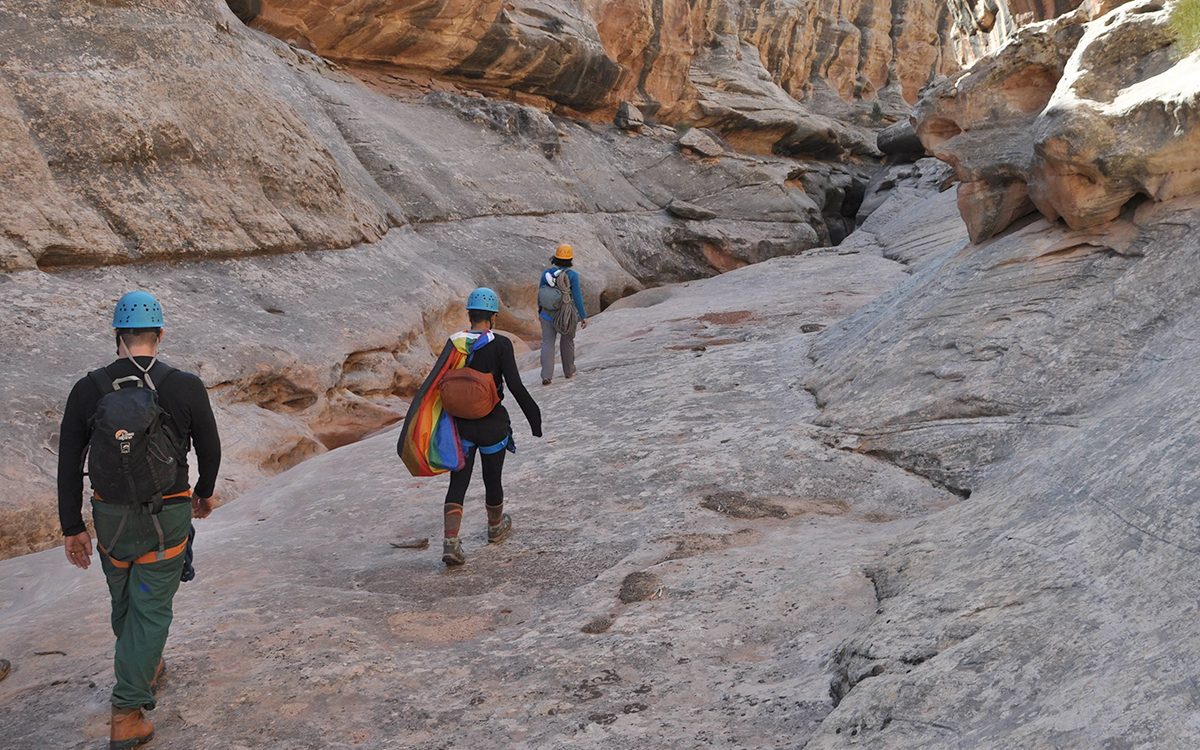 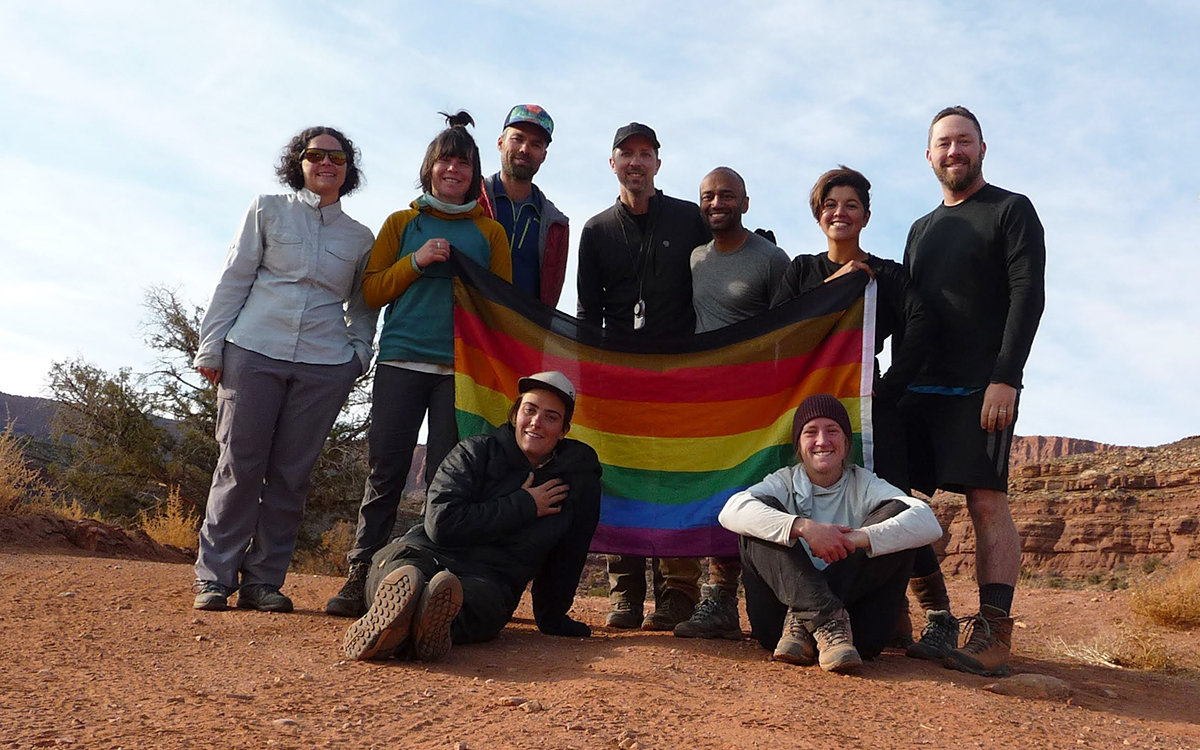 At the same time, I was nervous. As the “baby queer” in the group, I worried whether others would consider me legitimate enough. Would I catch all the queer references and jokes? Did I know enough queer history? When we shared stories, would I have enough experiences of my own to contribute? And, perhaps most terrifying of all, would I be certain enough about my identify for this space? Could I, as Dunham wrote, let the other backpackers in on my confusion without making them doubt my conviction? Would they be able to hold and trust my nuance?

Like so many marginalized identities, the history of queer people in the US outdoor industry has been one of exclusion. In advertisements, media campaigns, sales catalogs, and magazines, queer people remain vastly underrepresented. For decades, the Boy Scouts infamously rejected queer people, only allowing queer participants in 2013, queer leaders in 2015, and transgender boys in 2017. National parks and outdoor recreation areas have been, in the past, sites of homophobic violence: In 1996, a man murdered a lesbian couple while they were hiking in Shenandoah National Park. Political rhetoric has also often used the very idea of “nature” to support the intolerance of queer people. If queerness was “unnatural,” our “lifestyle” put us in direct conflict with what the natural world intended, and thus the structures we had built to exclude queerness were reasonable.

In the last decade, queer people have responded to such bigotry by creating several organizations—Queer Nature, Venture Out Project, Out There Adventures—that provide safe spaces for queer people to enjoy the outdoors. NOLS’s commitment to diversity, stated in its 2014 strategic plan, led to the creation of the organization’s first affinity hiking trips last year, including our all LGBTQ+ trip through the Utah desert. Four other LGTBQ+ courses—ranging from horsepacking Wyoming’s plains to sea kayaking in the Pacific Northwest—are scheduled for 2020. 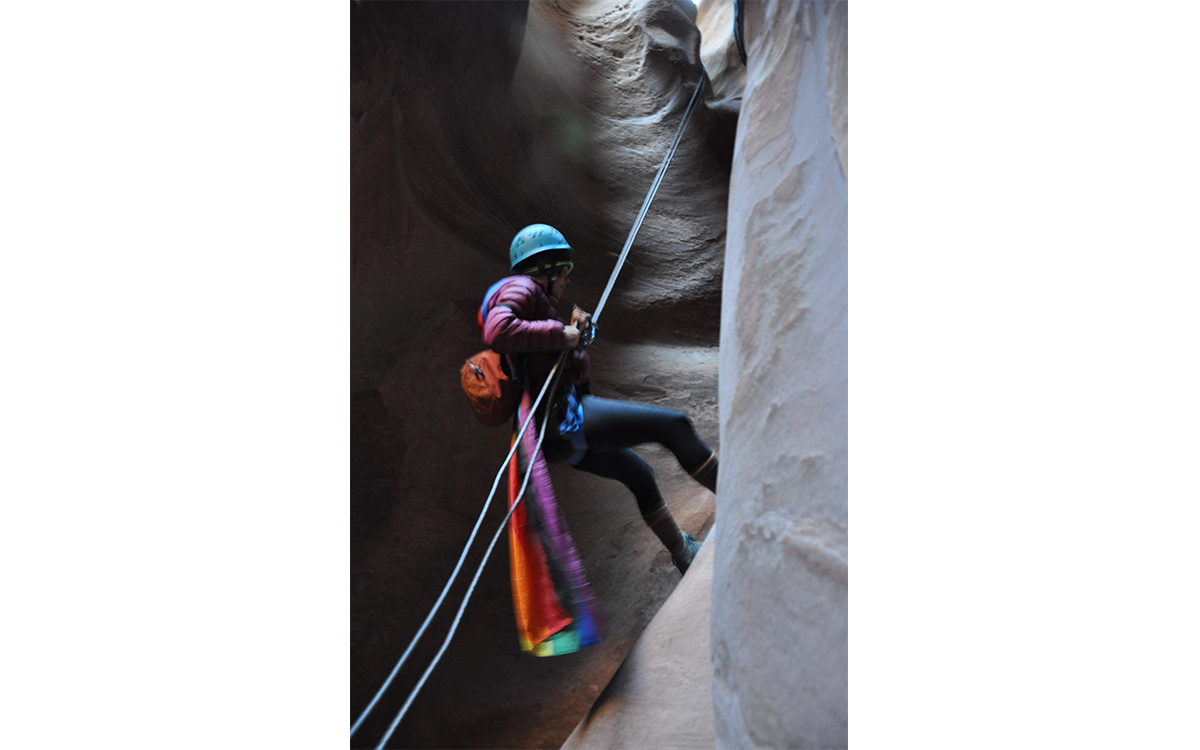 Just days into our trip, the group already exhibited the traits I’ve always loved and appreciated about affinity groups: the specific kind of ease only possible when a group shares a marginalized identity, the refreshing experience of finally living as the dominant culture in a space. On our trip, the word “heteronormativity” was repeated, and complained about, daily. Commentary around gender roles and sexuality—often considered taboo in straight circles—were front and center. While hiking or sitting around the campfire, we often traded stories of experiencing homophobia or moments when our gender presentation was policed. And, perhaps not surprisingly, in our queer group, heteronormative gender roles and norms didn’t necessarily always play out. Women often hiked the fastest or volunteered for the most intense and dangerous parts of each excursion; men enjoyed cooking on the campfire stove or taking extra care of their nails when reaching camp.

Every so often, I’d look around the red mountains surrounding us, and it would hit me that we were nine queers, taking up so much space in Utah. That in itself felt incredibly important.

To my most relieved surprise, many of the trip participants had confusion about their queer identity just as I did. On the first day of our trip, our instructors asked us to choose a word to describe how we’re feeling. One woman responded with the word “liminal.” Many of us had never heard the word before and asked what it meant.

“It means existing in between two spaces, being on both sides of a threshold,” she responded.

We all blinked, then burst into a laughter of recognition. The instructor joked, “I think that’s been how I’ve felt my entire life.”

It didn’t matter how long a person had been out, or how many romantic queer relationships they had had, everyone on the trip was still evolving, still had aspects of themselves they continued to wrestle with, ideas they hadn’t sorted, parts of themselves they couldn’t organize as neatly as society may have wanted. I was reminded of something that Justin Torres wrote in an essay for The Washington Post after the 2016 Pulse Nightclub massacre in Orlando:

“People talk about liberation as if it’s some kind of permanent state, as if you get liberated and that’s it . . . happy now? But you’re going back down into the muck of it every day.”

On our trip, I spent nine days surrounded by queers of all ages, gender identities, phases of life, and each struggled differently with living a queer life in the muck of a straight world. All had experienced moments of liberation—coming out to their family, changing their gender identity, relieving their bodies of the rigidity of some gender norm. And yet, we all still had further liberation ahead of us—how to handle queer parenting, queer divorce, queerness and whiteness, queerness under gender transition, and of course, queerness in the outdoors.

For years, I have relied on the outdoors in moments when I needed clarity; I have often sought out the mountains to hold my confusion and my doubt. Nature had always welcomed my insecurities and nourished me into a place of grounding. But on this expedition, I realized that as I listened to the mountains, they would tell me nothing for certain, nothing fixed or simple.

In the end, perhaps what made me still a “baby queer” was not my romantic inexperience or my ignorance of certain references, or even my insecurity. It was me still naively waiting for my identity to become something concrete, to fit the neat and easy answers other people wanted.

In their New Yorker essay, Dunham writes: “Conviction comes in bursts, as does fraudulence. Sometimes I say ‘Cyrus’ out loud and there’s a click of alignment. But Cyrus is also tentative, a liberating gesture that I always fear will be taken from me when I’m yanked back to reality by the ‘truth.’”

Most days, when I say “queer” out loud, I too feel the click. But some days, this identity still feels tentative, fragile, ephemeral—as if I could lose it at any time. In those moments, I feel grateful I can now remember those nine days in the desert with nine new queer friends, where I learned to gain some kind of peace living in the liminality.