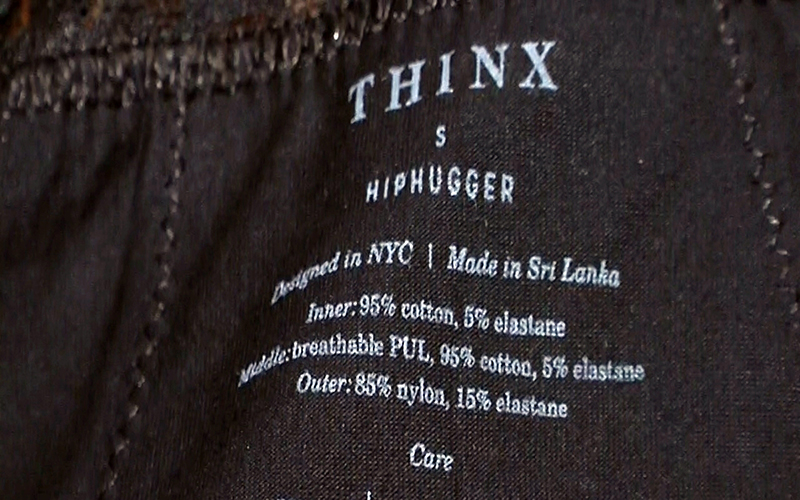 Remember how after I introduced myself to you in my debut column, I jumped into a ladylike conversation about how toxic chemicals in single-use menstrual pads are likely absorbed through skin? Then I overshared that I wear Lunapads’ leakproof menstrual underwear because it’s more comfortable and it’s certified organic. I also mentioned that I’d had a difficult time getting swimwear and organic-period-underwear manufacturers to reply to my inquiries about how they measure up on workers’ rights and sustainability and whether their period underwear has certain toxic chemicals in them.

Well, I decided to get the information myself. To do that, I mailed unused (I swear!) Lunapads and Thinx menstrual underwear to Dr. Graham Peaslee, a nuclear scientist at the University of Notre Dame who discovered PFAS chemicals in fast-food wrappers in 2017, and his undergraduate student assistant Robert Bartsch. No one had asked them to test menstrual underwear before. But I needed to quiet the voice in my head, since I started wearing Thinx in 2016, that said, “Surely life can’t be so easy that you can bleed seven days a month and feel comfortable.”

The results are in, and I’m afraid it’s bad news.

My Thinx “organic” brief and “organic” BTWN Shorty underwear for teens had high levels of per- and polyfluoroalkyl substances (PFAS), especially on the inside layers of the crotch. Some PFAS are associated with cancer, decreased immune response to vaccines, decreased fertility, and more. Exposure to PFAS at even the lowest concentrations has been shown to harm human health. The crotch in my underwear had 3,264 parts per million (ppm), and the one for teens had 2,053 ppm, according to Peaslee’s particle induced gamma ray emission (PIGE) spectroscopy test. That’s high enough to suggest they were intentionally manufactured with PFAS.

PFAS never degrade. In one test, the chemicals migrated from waterproof textiles for adults and babies into simulated spit and sweat, and laundry wash water. PFAS are not what I want touching one of the most sensitive and absorbent parts of the body.

In addition, Peaslee found that my Thinx underwear, one for teens, and a non-organic Super Hiphugger had tens to hundreds of ppm of copper on the inside of the crotch, and zinc on both sides. Thinx did not respond to repeated requests for comment.

The good news is my Lunapads menstrual underwear for people of all genders did not have PFAS, according to Peaslee’s test.

Oddly, the Thinx BTWN website said, “Our signature period-proof technology has an application of nonmigratory silver, commonly used in performance wear and medical devices to control odor and the spread of bacteria.” The Women’s Voices for the Earth (WVE)’s website cites studies that state, “Silver can have adverse impacts on beneficial vaginal bacteria”:

I contacted Alexandra Scranton, WVE director of science and research. She told me, “WVE questions the need for an antimicrobial layer in period underwear in the first place. Silver applications in athletic clothing fabric are a marketing gimmick and have a poor track record of actually being effective. Putting potent antimicrobial chemicals adjacent to vaginal tissue where a balance of healthy vaginal bacteria is crucial to health sounds like a truly unnecessary risk.”

“My worry is that these metals are not part of the dye used to color them (neither make black dyes) but are actually zinc oxide and copper nanoparticles,” Peaslee told me. “These nanoparticle metals are used as antimicrobials and might be able to penetrate the skin and get into the bloodstream. The microbial toxicity of all these compounds is well known; what isn’t as well known are the human lymph node responses to them and other disease outcomes in humans from exposure.”

All of this had me rethinking Thinx: Which organization certifies the company’s “organic” underwear? Does its polyurethane lamination (PUL) meet US government CPSIA standards indicating that there are no diisocyanates present? (Human exposure to them poses a risk to health, in particular asthma in workers.)

Oh, and how can I get the hundreds of dollars back that I spent on my Thinx menstrual underwear plus the three I bought in May and October 2019 that Peaslee’s team tested?

Companies might not disclose treatments they add to fabric. As consumers, we can demand better. Here’s what you can do:

If the product doesn’t match green claims, ask the manufacturer for a refund and a prepaid envelope (recycled, of course!) to take back their product and find the greenest way to safely dispose of it. If it’s toxic, it might be safer to not recycle it into another toxic product.