Three summers ago, Kevan Chandler was sitting alone in a field atop a hill in County Kent, England. It was something the 33-year-old had never done before for one simple reason: spinal muscular atrophy—a genetic disorder that withers nerves in the spinal cord and weakens muscles—had confined him all his life to a wheelchair. Until this moment, the last time he’d been on a hiking trail was on his father’s back as a much-lighter child.

Not that Chandler hadn’t tasted adventure. He was raised in the foothills of North Carolina but had family all over Canada and California, and his dad’s work as an airplane mechanic meant the family traveled a lot. In high school and college, Chandler played the harmonica and sang in an acoustic punk band called Fluffy Road-kill. Touring, always with his wheelchair, had given him the chance to see some of the country but still hadn’t quenched his thirst for adventure.

Once, while on tour, Chandler told his bandmates that if he were able-bodied, if he were driving, they’d never get anywhere. Any time he saw an open field, he’d stop the car and run into it. Sky above, earth below, him and God in the middle. His bandmates smiled apologetically. They drove past a lot of open fields.

After college, a cohort of Chandler’s friends, whose Greensboro, North Carolina, houses weren’t wheelchair accessible, would piggyback him into weekly potlucks and jam sessions. Friends scooping him up and gathering the party around him gave Chandler brief, novel spans without his wheelchair, and he began to wonder what else they could do without it.

Chandler had always been a Ninja Turtles fan. His buddy Tom Troyer, a burly man with a thick, black beard, had spotted a slew of sewer entrances around town. Late one night, Troyer set a steel backpack frame on a coffee table, placed Chandler on it, and cocooned him in a pair of ENO hammocks. The duo wrangled three other friends and trudged through the cold, wet network of Greensboro’s tunnels for several hours, Chandler strapped to Troyer’s back facing backward. For Chandler, this was danger, discomfort, and adventure, an experience impossible with a wheelchair or without friends whose constant support had become a given. Later that night, eating sandwiches at a Jimmy John’s and still buzzing, the group posed the obvious question: What next?

Chandler yearned to roam farther afield. It would mean bending the rules of accessibility, something he’d understood since childhood. His older sister, Connie, also lives with spinal muscular atrophy. Both had become intimate with the shifting compromise between what they wanted to do and what they could. Sometimes, Chandler had learned, you pushed harder; sometimes you simply needed to give up. Now, he wanted to push. 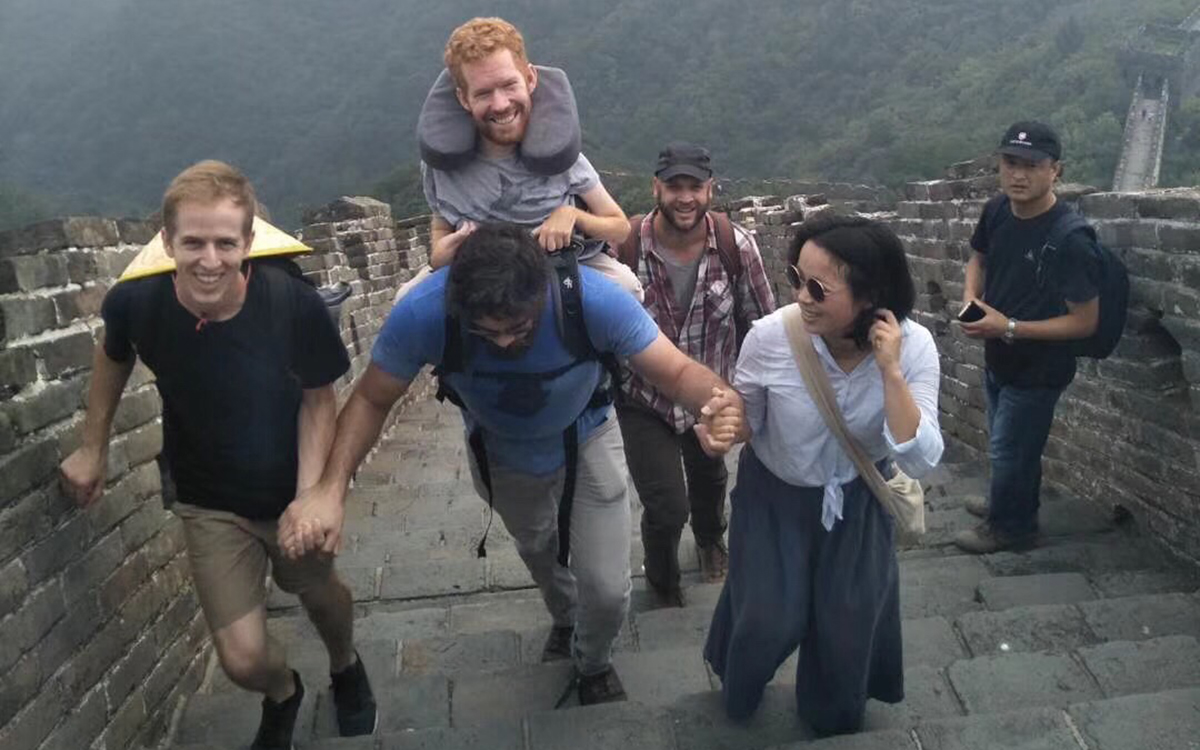 Chandler set his heart on Europe, land of his forebears and literary heroes. “And everything I wanted to do was not traditionally handicap accessible,” he recalls. It was time to ditch the wheelchair, to explore the unreachable zones from which his chair had always kept him. Chandler and Troyer realized they needed something sturdier than the makeshift hammock pack he used in the sewers.

Troyer figured they could rig Chandler into a backpack for a more comfortable haul but quickly realized nothing like what they’d envisioned existed. At least not yet. Browsing the local REI, they found a Deuter Kid Comfort 3 and took it home.

“It was a good base to start with,” Chandler says. “But, you know, it’s designed for a toddler—and I’m an adult.”

Everything from the pack’s sturdiness to its weight distribution and padding needed an overhaul, but they improvised and made it work. They added straps to secure Chandler’s arms and legs, moved the stirrups and sewed them to the hip belt, rebuilt the seat to shift his weight to his hips, and added an overstuffed neck pillow to cradle his head.

In summer 2016, Chandler headed to Europe with five friends who took turns hoisting all 65 pounds of him around the continent for a month. They hiked weathered stone steps up to Skellig Michael, a medieval Christian monastery on a tiny Irish island, and walked the woods, fields, and pastures of the English countryside. In Samoreau, they camped beside the River Seine with a group of French Roma playing music at a festival honoring Django Reinhardt, the 1930s virtuoso jazz guitarist who grew up in the adjacent town. Reinhardt, whose hands were disabled from severe burns that required him to relearn his craft, had been a longtime inspiration for Chandler.

The journey proved revolutionary. Chandler came home convinced that others could benefit from the pack he’d molded to his needs. He founded We Carry Kevan, a nonprofit whose aim is to mobilize people with disabilities through innovation. He also contacted Deuter—the manufacturer of the Kid Comfort 3 he’d already adapted— and began a collaboration with the company to build out a fully adjustable custom pack that could hold adults up to 70 pounds. Chandler and Troyer used notes from the Europe tour and, with considerable experimentation on the kitchen floor, sent Deuter their improved modifications of the Kid Comfort. Deuter fashioned a prototype, adding specs similar to Chandler and Troyer’s earlier build.

In the fall of 2018, Chandler regathered the Europe crew and took the final prototype to China. Troyer and the others carried him on their backs once more, hiking up remote mountains and along rivers. They visited orphanages run by Show Hope, an organization that houses orphans with disabilities. Deuter, now We Carry Kevan’s official manufacturing partner, donated extra packs to the kids to help spread his nonprofit’s message of redefined accessibility. The WCK Pack, named for the concept of a wolf pack—a group that travels together and is therefore stronger than any loner—became available this past July.

“We’re glad to be able to help out Kevan and others like him who have not had accessibility to the things he was doing in Europe and Asia,” says Bill Hartrampf, president of Deuter USA.

Which is to say, if you want to hike in the woods, don’t think how to change the forest. Change how you enter it.

“You don’t want the whole world to be made traditionally accessible,” Chandler observes. “You don’t want an elevator at a 1,400-year-old monastery. But that doesn’t mean that it can’t be accessible by getting creative and working together. That’s the thing about [this pack]. The sky’s the limit.”

That was the lesson Chandler had learned on that first trip to Europe. It was there, in the Kent countryside, on a dirt path no wheelchair had ever seen, where he truly found what he ached for.

In the middle of a six-mile hike, Troyer had stopped suddenly at the top of a knoll.

“This’ll do,” he said. He took Chandler off his back and set him on the ground. Then he and Chandler’s other friends hopped a fence and disappeared. To Chandler’s right was the forest of swaying trees. Below, a mile off at the hill’s base, nestled the English town of Westerham.

Chandler took a deep breath and let it out. He looked across the range of hills and valleys, steeped in the fluttery silence of wind in tall, green, beautiful grass. And he had a realization. Those hills and valleys were no longer unreachable.