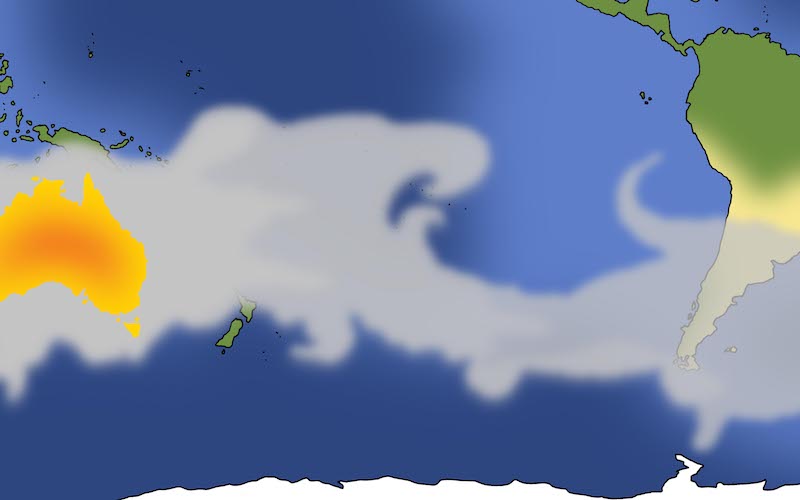 Catastrophic bushfires in Australia burn an area larger than Portugal. Twenty-six people have died, and a billion animals may have perished—perhaps more—leaving some species on the brink of extinction. Australian authorities are planning to kill 10,000 feral camels because they are competing with humans for scarce water. Smoke from the fires reaches Argentina, 7,300 miles away.

Floods in Jakarta, Indonesia, kill 66 people, with more rain on the way.

2019 was the second-hottest year on record.

The Interior Department removes workplace-discrimination protections from its LGBTQ workers.

The American Petroleum Institute seeks to rebrand its industry as “gas and oil” rather than “oil and gas.”

Greenhouse gas emissions in the United States drop by 2.1 percent in 2019, driven almost entirely by an 18 percent drop in the use of coal. The reduced use of coal saved more than 26,000 lives. But emissions from gas are set to rise by 30 percent over the next five years, the equivalent of those from 50 new coal-fired power plants.

Sweden shuts down one of four nuclear reactors at the Ringhals power station after 40 years of operation. Switzerland shutters its 47-year-old Muehleberg reactor, beginning the nation’s exit from nuclear power.

Its surging stock price makes Tesla the most valuable US automaker ever.

Trump wants to change the National Environmental Policy Act so that fewer major construction projects will require environmental review, and those that do will no longer have to consider climate consequences. Implementation of the changes will likely depend on whether Trump is reelected.

The Chinese paddlefish, an ancient species once native to the Yangtze River that could grow to more than 20 feet in length, is declared extinct.

Tigers are extinct in Laos.

Trump’s Energy Department rescinds a Bush-era ban on incandescent lightbulbs that was to have taken effect on January 1. Every year, the move will cost US consumers $14 billion and generate 38 million tons of CO2.

The highest court in the Netherlands rules that the government must reduce greenhouse gas emissions by at least 25 percent by the end of 2020.

Under a new Trump administration interpretation of the Migratory Bird Act, the killing of migratory birds by oil spills, chemical contamination, and construction activity will no longer be punished or fined.

The Federal Emergency Management Agency’s 2019 National Preparedness Report, an annual review of threats to the nation, does not mention climate change or sea level rise.

Washington State representative Matt Shea is accused of “domestic terrorism” for his role in helping to plan the 2016 armed takeover of Oregon’s Malheur National Wildlife Refuge.

A 12-year-old male wolf, one of two remaining original wolves on Isle Royale National Park in Lake Superior, is killed by the wolves recently brought in to bolster the island’s wolf numbers.

An initiative to reintroduce wolves in Colorado has qualified for the November 2020 state ballot.