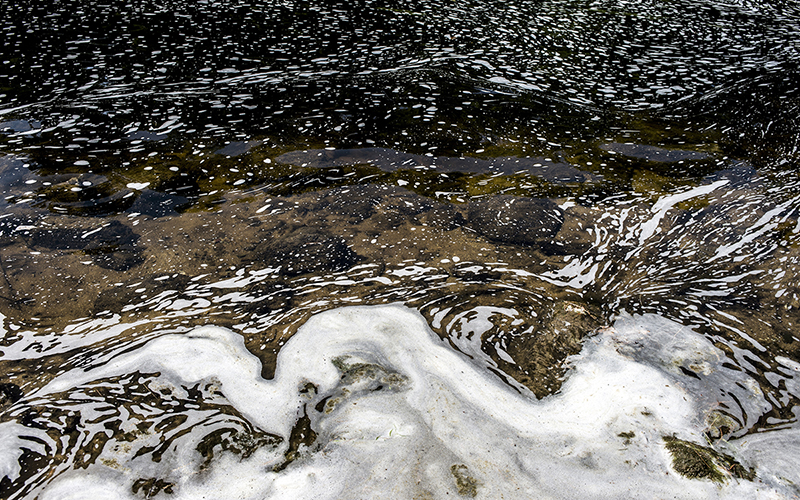 That was the attitude of civic responsibility that spurred Cathy Wusterbarth and other residents of Oscoda Township, Michigan, to form a local environmental action group called Need Our Water (NOW) in 2017. A year earlier, state and local officials had issued a drinking water advisory after some local wells tested positive for per- and polyfluoroalkyl substances—toxic chemicals best known by the acronym PFAS. The contamination had come from Wurtsmith Air Force Base, a B-52 bomber base that operated in Oscoda until its closing 1993 and where, beginning in the 1970s, the military used a type of firefighting foam that contained PFAS chemicals. But when Michigan officials ordered the air force to comply with a new state law and provide the local residents with drinking water, the military refused. So Wusterbarth and fellow community members decided they had no choice but to organize to force a cleanup.

“Our mission is to be a reliable resource for education and communication for Oscoda and surrounding communities and to advocate and be a voice for our community,” said Wusterbarth, who was born in Oscoda. “We need clean municipal water to all of the affected area. We need medical monitoring, risk assessment, anything that will help assess the health risk in the community.”

PFAS are sometimes referred to as “forever chemicals” because of their long-term persistence; exposure can cause cancer, thyroid disease, and other health problems. Michigan officials became aware of PFAS contamination at Wurtsmith Air Force Base in 2010, making it among the first places in Michigan where PFAS contamination was discovered. (The contamination at Wurtsmith could potentially reach people well beyond Oscoda because waterways in the area connect to Lake Huron, which supplies municipal water to more than 1 million people in the United States and Canada.) Since the discovery of PFAS in Oscoda, environmental regulators have confirmed 192 sites of PFAS contamination across Michigan— more than any other state, according to a report by the Environmental Working Group. Wurtsmith Air Force Base is one of more than 400 military sites nationwide that have been contaminated with PFAS.

In the past two years, the Michigan government’s PFAS Action Response Team has taken steps to begin remediation at contaminated sites, but disputes at the state and federal levels have slowed progress in Oscoda. After the Department of Defense and air force initially refused to provide safe drinking water to residents, Wusterbath and the members of NOW, along with another activist group called Michigan Demands Action, began advocating on behalf of impacted residents. Eventually they got the attention of US senator Gary Peters, who organized a meeting between air force officials and Oscoda residents in April 2019. The air force eventually agreed to use Michigan’s ground and surface water standards in testing, install a groundwater treatment system, and upon completion of their own investigations, consider cleaning up other areas where contaminants may have leached into ground or drinking water. However, air force officials said they needed four more years to adequately study and develop a final remediation plan.

In response, Senator Peters said at a town hall meeting, “I don’t think four more years is acceptable to anyone.” Residents say the progress is taking too long. “In 10 years, they’ve put in place two filtration systems on this base,” Wusterbarth said. “We’ve been told they need 18 in order to address it. Obviously, this is inadequate, so we’re demanding that they put these in place.… Every time they’re testing, they’re finding new [contaminated] areas.”

The PFAS contamination has had a dramatic economic impact on Oscoda, a small, rural township with a population of about 7,000 where tourism is a major driver of the local economy. Contaminants have been detected in local lakes and rivers, as well as in fish and wildlife near the base, causing declines in the numbers of hunters, anglers, campers, paddlers, and other outdoors enthusiasts traveling to the area.

Representative Dan Kildee, a Democrat who represents Oscoda in Congress, has been a strong advocate for PFAS cleanup. Kildee created a bipartisan congressional PFAS Task Force in early 2019 that is focused on securing more federal funding for cleanup. But even with bipartisan support for PFAS cleanup in the House of Representatives, Kildee has been frustrated with the Senate’s lack of urgency. While the House version of the recently passed National Defense Authorization Act included provisions to phase out PFAS, establish cleanup protocols, and establish a federal drinking water standard for PFAS levels, those measures were not part of the Senate version of the bill.

“[The Senate version] did not include the really important provisions that would [protect people from] PFAS in our drinking water, and it did not include requirements that we had in the House version of the bill that would make sure that corporate polluters and others would clean up the PFAS mess that they made,” Representative Kildee said in a recent video produced by NowThis. “Senate Republicans took those out. They chose corporate polluters over public health.”

“If you look at the map of all the [contaminated] sites in Michigan, there’s dots everywhere. We’re still struggling with connecting all the dots.”

While Wusterbarth praised Kildee and Peters, along with Senator Debbie Stabenow, for their efforts, she expressed disappointment that Michigan’s Republican-controlled legislature hasn’t done more to deal with the widespread PFAS contamination across the state.

“We have a state representative and our state senator, both of them are inadequately addressing the issue in my opinion,” she said. “They’re not introducing legislation to address the issues we have in Oscoda, and when legislation is put forth at the state level, they’re not supporting it.”

After Governor Gretchen Whitmer took office in early 2019, a reorganization of the state’s environmental agencies resulted in the newly established Michigan Department of Environment, Great Lakes, and Energy, and Michigan’s PFAS Action Response Team was elevated as a permanent part of the agency. The state’s PFAS response is one of the most comprehensive in the country. But for residents of Oscoda, there’s an even more complicated repair that needs to be made: simply rebuilding faith that government can fix their water.

“We’ve lost trust,” Wusterbarth said. “There’s been a change in administration [in Michigan] in this timeframe, so we had renewed hope for a working relationship. We’ve reminded them that we don’t trust them but provided them opportunities to regain that. We remind them on a regular basis that we deserve transparency and attention to these matters.”