Larrilou Carumba had been working full-time as a housekeeper for the San Francisco Marriott Marquis for more than four years when her hours were abruptly cut. Five eight-hour days a week, plus occasional overtime, suddenly turned into two to three days a week. 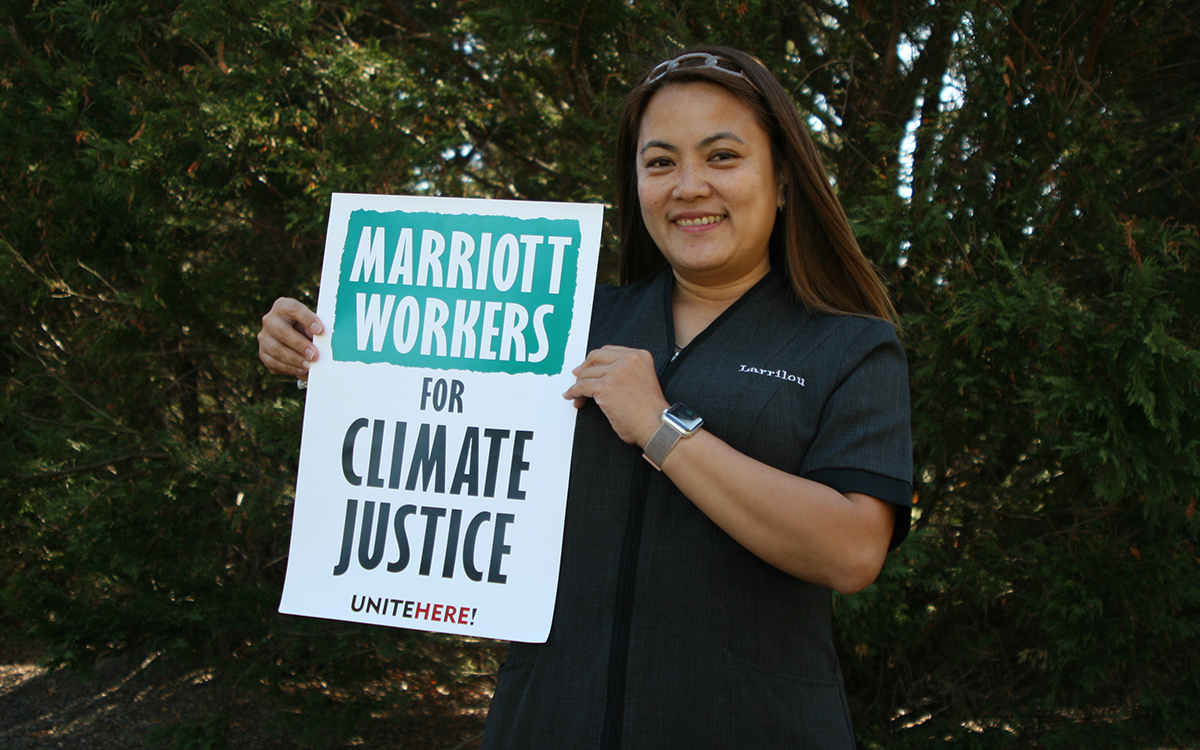 In 2015, the San Francisco Marriott Marquis adopted Marriott’s “Make a Green Choice” program, which encourages customers to forgo housekeeping services in exchange for points with Marriott International’s loyalty program, now called Marriott Bonvoy.The change was devastating for housekeepers. Carumba’s (pictured, right) hours were cut so dramatically that she could no longer afford to pay her rent—she and her three children were evicted from their apartment.

“Make a Green Choice” was designed to “increase sustainability and reduce the hospitality industry’s environmental footprint” while allowing guests the opportunity to “reduce water, energy, and chemical usage,” according to a Marriott statement. However, those aspects of the program that actually result in measurable energy and water savings—the reuse of towels and linens—were already an option for many Marriott guests prior to the adoption of the program.

Is “Make a Green Choice” about sustainability, or reducing labor costs? Real change, or customer-assuaging greenwashing?

Greenwashing—the term often used by environmentalists and the media to describe deceptive eco practices—is nothing new in the hotel industry. In fact, the term was coined by environmentalist Jay Westerveld in the 1980s to describe a sign asking resort-goers in Fiji to protect coral reefs by reusing their towels. In the decades since, the travel industry has become a poster child for corporate greenwashing.

Climate activists say sustainability programs that fail to significantly reduce carbon emissions—while simultaneously burderning workers—fly in the face of their efforts to dispel the fear that transitioning to a green economy threatens job security. “When companies disguise job cuts as a sustainability measure, it hurts the cause of climate justice.” This is according to Anand Singh, president of Unite Here Local 2, the San Francisco chapter of an international hotel and restaurant workers’ union. Singh explains, “Huge industry leaders like Marriott, which is making billions of dollars a year, should be taking real action on climate.”

Despite a history of tense, sometimes adversarial relations between labor and environmentalists, the modern climate movement increasingly looks to labor organizations for partnership. The Sunrise Movement, a youth-led organization that has catapulted to the forefront of climate organizing, has incorporated labor interests into its mission statement: “We’re building an army of young people to stop climate change and create millions of good jobs in the process.” The Green New Deal, Democratic lawmakers’ sweeping plan to address the climate crisis, includes a jobs guarantee. These efforts to connect labor interests with climate action acknowledge that the burden of fighting climate change should fall on big polluters—not workers.

It is challenging to analyze the climate impact of Marriott’s “Make a Green Choice” program; Marriott does not provide public information about any resulting water and energy savings, and a statement provided by a Marriott spokesperson did not address Sierra’s request for more information about the program’s efficacy.

However, a review of leading environmental studies suggests that forgoing housekeeping is hardly saving the planet. “There are zero leading environmental studies that recommend skipping housekeeping,” Singh says. “And when housekeepers do get into a room that hasn’t been serviced in days, they report needing to use more water and chemicals, and they experience pain and injury from having to push their bodies to the limit to get the job done.”

“There are zero leading environmental studies that recommend skipping housekeeping. And when housekeepers do get into a room that hasn’t been serviced in days, they report needing to use more water and chemicals, and they experience pain and injury from having to push their bodies to the limit to get the job done.”

While it is unlikely that forgoing housekeeping services reduces the environmental impact of guests’ stay, it is possible that by offering loyalty points, the program has succeeded in convincing some guests to reuse their towels and linens. However, the significance of these small gains must be analyzed in the context of Marriott’s enormous carbon footprint.

Its 7,200 properties and 1,362,000 rooms emit as much carbon dioxide as a small nation, according to Marriott’s CDP Climate Change Questionnaire 2019. While Marriott has succeeded in bringing down carbon emissions by just over three percent per square meter in its franchised portfolio since 2016, the urgency of the climate crisis demands faster action.

Acquiring more renewable energy would be a good start. Despite setting a goal of acquiring 30 percent of its overall electricity consumption from renewable sources by 2025, the hotel chain did not report purchasing any of its millions of megawatt hours of energy from renewable resources in 2018. That same year, Marriott’s $33 million USD investment in energy savings initiatives like LED lighting retrofit projects were dwarfed by the $3.4 billion Marriott that returned to shareholders.

Marriott isn’t the only hotel chain to offer sustainability programs that encourage guests to opt out of housekeeping—in the years following the rollout of Marriott’s “Make a Green Choice,” the practice has become an industry-wide trend.

Unite Here has chosen to focus its advocacy efforts on Marriott because of the company’s outsized impact on the hotel industry. “As the biggest and richest hotel company in human history, Marriott has the responsibility to be a leader, stop deceiving customers about this so-called ‘Green Choice’ program, and instead set an industry standard by embracing solutions that can actually make a difference for the planet,” Singh has stated.

Marriott has put forth a series of climate goals, including reducing water consumption by 15 percent, carbon emissions by 30 percent, waste to landfill by 45 percent, and food waste by 50 percent by 2025. While a step forward, these objectives are considerably less ambitious than those of some industry competitors. Hilton, for example, has committed to lowering carbon emissions 61 percent by 2030.

91 percent of Marriott housekeepers surveyed by the labor union report having their hours cut as a result of “Make a Green Choice.” The program likely saves Marriott millions in labor costs annually, according to Unite Here’s calculations. When their hours are cut so severely that they no longer qualify as full-time workers, Marriott housekeepers also report losing their healthcare. In a video produced by Unite Here, Edith Garibay, a housekeeper at the Coronado Island Marriott Resort & Spa in San Diego, describes her fears about losing her healthcare: “Green Choice hurts my family. When I have less rooms to clean, they cut my hours, and one time they cut my schedule, and we almost lost our health care. And that happened while my son was paralyzed in the hospital.”

Greens across the board aren’t buying it. Several leading environmental organizations—including the Sierra Club, Union of Concerned Scientists, and 350.org—have sided with housekeepers, signing a pledge promising to opt out of the program whenever doing business with Marriott.

“We want to save the planet, and we want to make it more sustainable, but we don’t want to do it on the backs of working families,” says Pedro Cruz, senior representative for the Sierra Club’s Labor and Economic Justice Program. “And that is basically what the Green Choice program is doing. 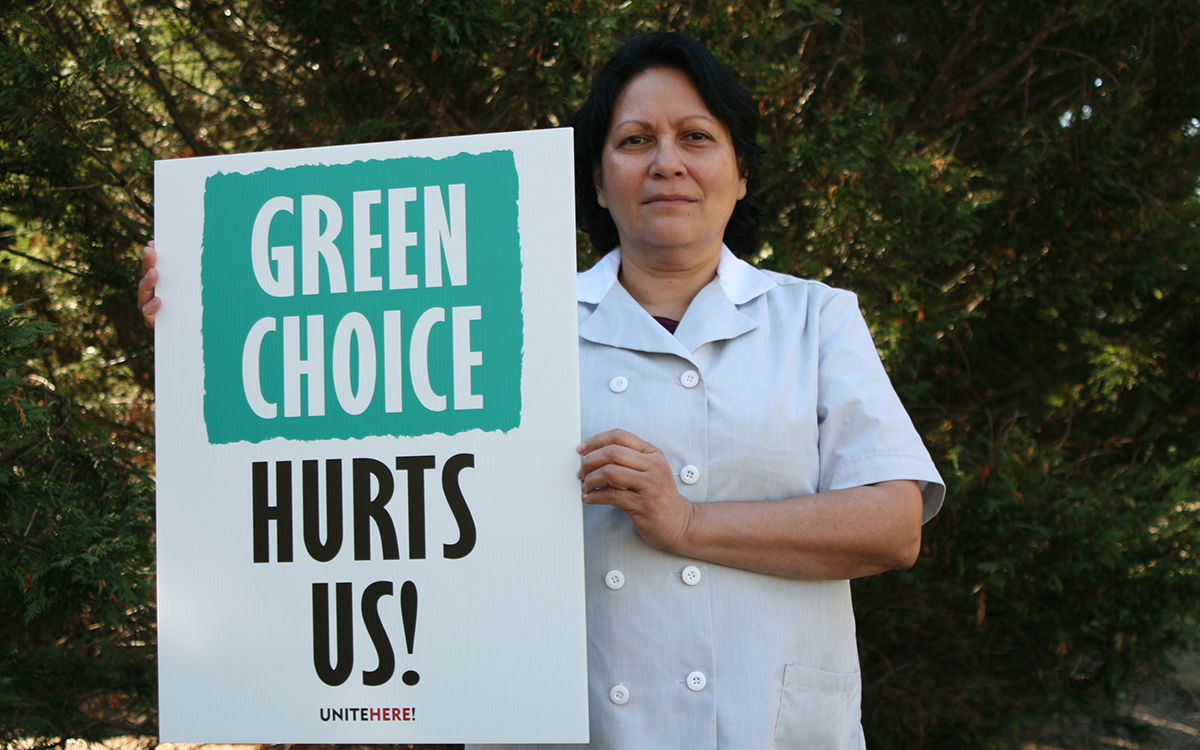 Maria Marta (pictured, right), a housekeeper at Marriott’s W San Francisco and a Unite Here Local 2 chapter leader, acknowledges her industry’s need for strong sustainability policies. “The reality is that Green Choice programs are good, because we understand that they help the environment,” Marta says. “What we don’t want is to lose hours at work.”

Marta and Carumba marched in the youth-led climate strikes in September of this year, carrying signs that read “Housekeepers for Climate Justice.” Both express concern about how climate change will affect their families.“My nephew, in El Salvador, all of this week they suspended his classes because of flooding from rain,” Marta told Sierra last October. “So of course, I am very supportive of helping the planet, for our families’ futures.”